I really can’t remember the last time I went a week without drinking. It was rough the last couple nights but this forum and all you awesome people have had quite an impact on me!
Just by reading posts by others I’ve learned a lot about myself.
At the start of this journey I gave myself a goal of 30 days. Because I’m not an addict. I just needed to take a break. I will be able to have addict couple drinks here and there… no problem!
I’m sure there are many more lies we tell ourselves.

I thought I didn’t have a serious problem because I was functioning. Working every day, being a single mom. Doing what I had to do.
Doing those things that I have to do will be so much easier not feeling so tired and groggy and hungover.

1 Week and I’m seeing myself so much more clearly. 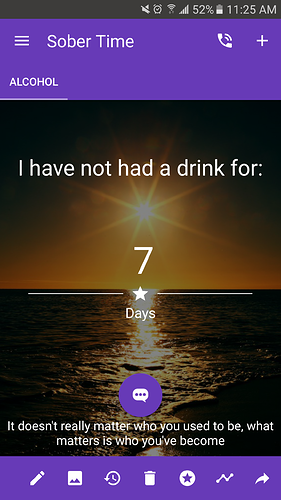 I love your saying for today. It doesn’t matter who you used to be just who you’ve become. Goodluck moving forward !

Congratulations! I’m a mom too and will be at my 7 day mark at midnight. Progress girlfriend!

I’m 7 days sober as well! Really glad I made it through the weekend. We can do this!

It sounds like you just have a high bottom. Alcoholics don’t necessarily need to have duis, an arrest record, lose their job. lose their kids or spouse or both, etc. A lot of us were functioning alcoholics and still had it all. It’s possible to lead two different lives for a time and maintain both lives. I did it for quite some time and was damn good at it, as warped as that sounds.

I’m not trying to be a Debbie downer here, but having to monitor your alcohol intake at all is very telling. I tried multiple things before eventually admitting, as you put it, that I was an addict.

"We alcoholics are men and women who have lost
the ability to control our drinking. We know that no
real alcoholic ever recovers control. All of us felt at
times that we were regaining control, but such intervals—usually brief—were inevitably followed by still less control, which led in time to pitiful and incomprehensible demoralization. We are convinced to a man that alcoholics of our type are in the grip of a progressive illness. Over any considerable period we get worse, never better.

We are like men who have lost their legs; they never grow new ones. Neither does there appear to be any kind of treatment which will make alcoholics of our kind like other men. We have tried every imaginable remedy. In some instances there has been brief recovery, followed always by a still worse relapse. Physicians who are familiar with alcoholism agree there is no such thing as making a normal drinker out of an alcoholic. Science may one day accomplish this, but it hasn’t done so yet.

Despite all we can say, many who are real alcoholics are not going to believe they are in that class. By every form of self-deception and experimentation, they will try to prove themselves exceptions to the rule, therefore nonalcoholic. If anyone who is showing inability to control his drinking can do the right- about-face and drink like a gentleman, our hats are off to him. Heaven knows, we have tried hard enough and long enough to drink like other people!