Are personal threads as journals still a thing? Well, welcome to my personal journal-thread. Why? I guess things percolate in my mind, or even spaces I have yet to discover, and I need a container. Do they relate to sobriety? Doesn’t everything when you’re in recovery? My process involves making connections with energy healing. Quite simply, for me, using energy to heal can take on narratives of woo-woo-ness, but in my novel understanding, because energy is vibrating information, it’s learning to read, see and hear this information and create meaning with it. Whether someone describes energy healing through listening to messages brought to her by gramma when making banana bread, or the intricacies of how the material world gives us deep attachment issues, I want to honor it all. Respect this understanding and reading, and make the assumption that being open to energy from our divine source is a power we have forgotten how to use. It’s there, everywhere, and I’m committed to connecting with it. My personality is rational, deep-thinking and clear, and it’s time to give space to my scarily sharp intuition, sensitivity and hope to enter a new world of understanding and healing myself, helping others. Why share? Because why not? If I share here, I commit to seeing the links to sobriety, so let’s start with one.
I learned a word today, from reading the Big Book. Augury : a sign of what will happen in the future; an omen. What a beautiful word, what an interesting concept to wrap my head around. And while within the context of AA, it used to make reference to the rising international impact of the success of AA groups, and what was to come. The power of peer support, the power of an approach centering the possibility to recover at the heart.
Augury. I felt inspired to look at how the energetic field of such a word, and I could only see how vast and far reaching it is. The origine of this word is an ancient Roman religion (actually) of interpreting omens from the behavior of birds. So yeah, there literally was a time when time & space was predicted by birds, and augurs determined what it was through interpretation. And this was legit information.
I digress. The word feels potent for me at the moment, as I struggle to find which information to rely on and how. We all predict, but based on what type of information? For me to learn to interpret energy and make sense , even at a time like this, feels so important. I guess I just have to discover why, and how. I guess I don’t want to be alone and I invite you along 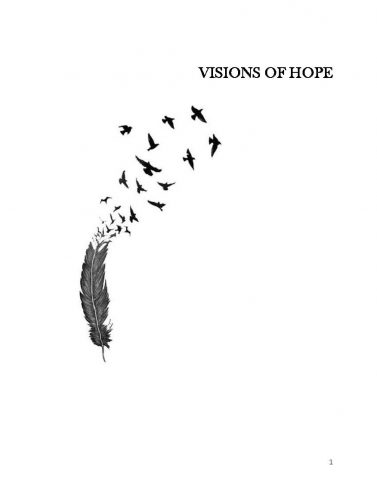 What an exciting path to be on!! We are energetic beings…and healing …helping “my” energy flow has long been a focus.

Before virus I had a focused energy healing and had hoped to continue with either that therapist or work with a new one…that is on hold at the moment.

I spend time with my stones now…I find their vibrations comforting.

I had an amazing acupuncture experience many years ago for my hand/arm tendonitis…after several sessions I felt the literal release of the energy blockage and the energy flowed right out my previously numb finger…I have been a believer since then.

I honestly hadn’t considered energy blockages and alcohol…but it makes sense that numbing ourselves would pent up our energy or dull it. Thanks for giving me this to consider and cogitate on!

I am holding my rose quartz currently,love my crystals,just ordered 2 spherical ones of lapis lazuli and another rose quartz…
there is a global meditation for the planet coming up on 4th April…there is different time zones noted .
Globalpeacemeditation

I had an appointment cancelled with an energy healer from Australia that was going to be April 16th, as I definitely feel the road on recovery is about unblocking old energies that’s lodged/trapped in the body and soul and about deep healing somehow and however I feel I need to …but anyway,I’ve gotta find daily ways to ‘source’ …
The human body is truly incredible, electro magnetic and bioenergetic.

@Hazy & @Sassyrocks, I don’t have connections with crystals yet! There is something daunting for me, like I don’t know where to start! I’ve never been very material oriented, as in things intimidate me, but I acknowledged yesterday that crystals could become my allies in areas I struggle with! How do you come to a crystal? How do they come to you?

For example, I let in others energies on a level that makes it hard for me to create my own space. I let them in. While I’m working on this through therapy and ++, I think I need some extra support and different aids. And I thought of crystals and stones.

Since I don’t know or have them, I painted some rocks with my child, applied Reiki on one and will use this to manifest health at least during this time. Here it is: 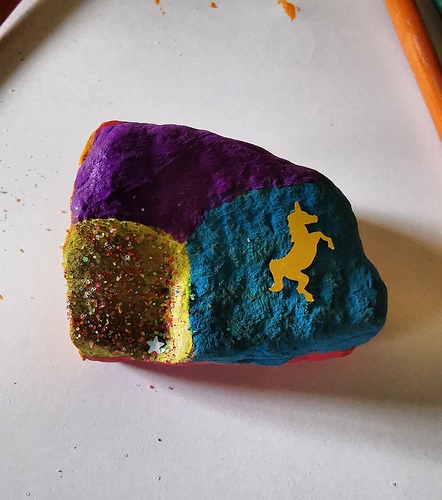 Wow what an awesome creation,reminded me of rainbow quartz or blue Labradorite

Beautiful!! I just have a few moments, but when you handle the rocks you feel your way…the ones for you will speak to you.

Thank you for this, I will most definitely join. “See” you there!

On my walk today. I have a high respect for crows. 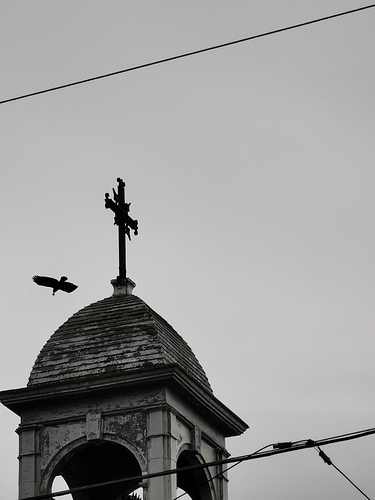 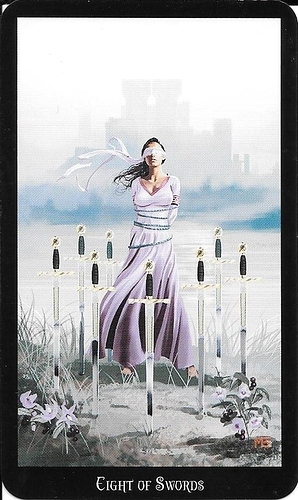 Eight of Swords, pulled in the second position of a ten card reading, a Crossing Card. It answers my initial question by describing the situation generating conflict and obstruction in my immediate present. The Eight of Swords is not to be interpreted negatively. It does however block me from fully expressing myself and freeing me.

The Eight of Swords is represented by a blindfolded woman, or person, surrounded by eight swords, and standing close to a stream of water. The symbolism suggested one being blinded by their own belief system, which in turn makes them unable of how to move forward, but if they remove this blindfold, they could take on a more empowering mindset, and see that their intuition (the stream of water) can guide them towards a clearer path out of the situation.

The whole point of tarot is to reflect on the subconscious through symbolism, archetypes and imagery. There is a certain magic, which is that this Crossing Card came to speak directly to what I’m currently feeling. Certain patterns of thought are no longer serving me, one of them being: I should know how to do this naturally, without failing.

The card is also suggesting the present dynamics of a victim mentality. I wanted to be honest with my own victim archetype and started listening. Usually the victim in me will see how the other person is unaware of their blind spot destroying my ability to be aware of mine, or me being threatened by theirs. Complex as it sounds, my victim feels threatened by the harm someone else can inflict on me because I was once victimized. I had no power at one point in my life to defend my physical and psychological integrity. The trauma this carries is that, I am never safe and always a target to someone else’s bling spot of violence. Where alcohol served once to keep me from feeling unsafe, it actually created more lack of safety in my life. But without it , the confrontation to my fear is intense.

There is also much to be explored in the archetype of the Eight of Swords, which is also if I were to draw up a list of limiting beliefs, I could and then understand that it’s not a matter of understanding them but dropping those mf like they are hot. I will do this exercise.

How I interpret this card is that, with this narrative and staying in my head, I have not been able to DROP down to my intuition and let it lead. I can learn how to be safe, psychologically, I have this power. I can in whatever way I choose, doesn’t have to make sense to anyone else, chose how I move through listening to my gut. Interestingly enough, the Base of the matter card, The Lovers, in position four calls me to be driven by values and not impulse and desire. But I don’t want to bore you with the magic of these cards

Thanks for listening to me.

Lovely card, what deck is it?

Hey,just bookmarked this thread for myself,…streamlining how I go to the app everyday,.looking forward to daily posts

.had a full on couple of days with camping in the bell tent last night in the garden!

…twas good for the kids and being outdoors but not for my neck and shoulders!.. was a good reset and positive has come from their moods and realising how actually it’s still quite cold, we dealt with it last night because that was what the plan was and we stuck to it

The above . Click and see where you land. Hope it works, let me know if it doesn’t.

Well that was the coolest thing ever, but it didn’t pick a card for me…likely it means I am scattered!!!

It’s a beautiful set of cards.

No, i think it’s the gif… So it didn’t work when you landed on it?

My tarot deck is by Juliet Sharman-Burke and Liz Green, The Mythic Tarot.

Thanks Liv. Love the colors and drawings so much. Your new avatar is stunning as well.

Do you read tarot cards?

I’m learning to yes. It is such a beautiful way to see life and feelings and our experience.

I had a woman up north I’d go to like once a year. It’s pretty spot on when I’ve gone.