This topic is all about me/your artistic photos and videos with it’s reason for being shot and/or posted.

It also includes anything you think you can think deeply from. A certain scene from a movie perhaps? Even if it doesn’t have any visual/audio me/you can just tell what it was by replying here and proceeding further why it caught your attention.

6 Likes
My daily challenge/s I experience outside the controlled environment
einarlim January 1, 2023, 9:32pm #2 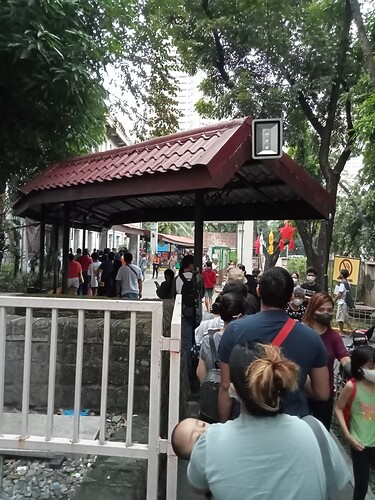 Waiting/Entering the hospital early in the morning as it opens.

I was thinking about how my mother kept on helping my father when he was still sick and how I just kept on playing video games. My mother is old and I’m always with her now. It’s me fulfilling a compensation for my childish attitude of just staying away from my father and satisfying myself with just playing video games because I just could not handle how my father was having colon cancer and me thinking my life has already ended. No more going out to malls to buy stuff, No more good tasting food or even going to a nice school or whatever that is in store for me in the future. If only my father just didn’t have an illness I told myself. At least I didn’t have myself get into trouble other than just really nothing. Whenever I come with my mother I see things like how an old man and woman sat in front of me while I was waiting for my mother to come out from consultation. I wondered how my mother found strength to just be there for my father. Even an old couple eating had made me asking my mother where did they buy food to eat at that time. I felt like the kid that used to read that book I borrowed (that I didn’t give back to my friend) beside my father in the cancer ward. I just didn’t know where because fastfood are too expensive. I recently saw packed food being sold. I think my mother and father ate hard boiled eggs most of the time before. The fact is when people get sick somebody needs to be with them. I can reflect on that I can say I really wasted a lot of time trying so many things that are actually not making me give any help to my family. That was when my father was still alive meaning when I was still a kid. Now I think I cannot let myself not know what to do just in case the time comes that I have to know them for me to take action efficiently. There is a baby there that has an illness and being carried by the woman. I thought I am lucky to have not made any more potential problems that will keep me away from being accessible to my mother. I’m glad to come with my mother to whatever she wants/needs me to. I am a bit sad because I didn’t think this way when I was a kid and it’s because I hated my father. I could’ve helped. When things happen any kind of help makes a difference. Why have I chosen not to help? I couldn’t even wash the dishes when I was a kid. I’m still eating and I was able to study. If it weren’t for my father I don’t think I would experience those. I took a place in line for my mother. My mother was not in line and I just asked her to go in line when I was close to entering the hospital. I’ve found myself thinking of how she was doing things for my father and gain momentum to take action in what needs to be done.

Even if this is happening I make sure in trying to put a smile on my mother’s face. I became upset last time because I was just confused. I’ll just not be in that kind of hurry. It’s near panicking really. It’s hard to think if I feel stuff but I disregard it because I have to do something for my mother. 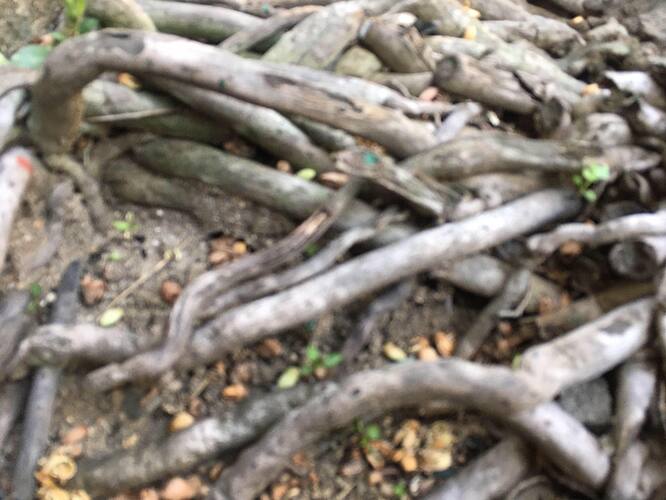 These are roots of our old tree.

This inspired me because I always look back into the things I come from and it keeps me grounded just like this.

It’s also a tree.
It doesn’t do anything but grow.

I will never do anything else but only grow out whatever obstacles I may face just as it faces rain, storm, illegal loggers or drought.

*This post has been edited upon moving to this topic and it was initially posted over here. 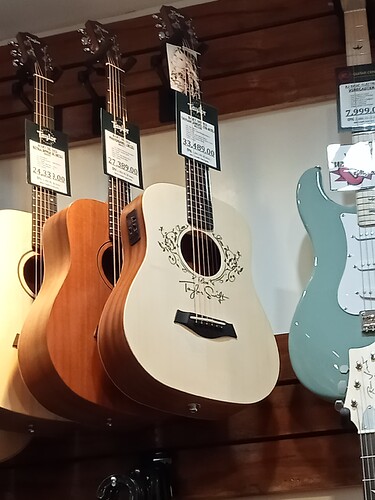 I saw an acoustic guitar that had the personal preferences of a music artist. It’s a Taylor Swift signature acoustic guitar. Along my music transit I understood these have a certain sound it displays. She’s a female singer. The signature guitar will work for a female that sings Taylor Swift’s songs most likely. They really have different sound, weight, string tension, size and even playing stance. Musicians hear the sound of the guitar in their/our preference also. Who would sing on something that doesn’t harmonize with how a person sounds when they sing? Up to this point in my guitar’s lifetime it has reached a standpoint? A certain stage is what I was trying to say there. A stage where it’s just right for what I like singing along not battling to harmonize my way in delivering the dynamics of how I think to express music then projecting them in unison of the voice and the guitar sound. Why are there signature instruments? For an easy way to find what is actually a good guitar? Of course not I would say. It’s a special guitar with special settings. According to what I’ve learned with my guitar. That guitar was made to make that kind of sound. This was actually what I had in mind. What Taylor Swift hears when she plays music would be the output of this guitar. Do you appreciate Taylor Swift? How she plays music? If I was able to experience things with my guitar can you imagine how many did she? Her spoken voice is at E. Make an E sound on this guitar and sing means you’re singing along what Taylor Swift hears when she performs. This is with her song Clean. It starts with an E but the record was done in electronic sound. That’s just me. I don’t really know how to play teardrops on my guitar but I know her spoken voice is at E.

“Hey, I got a guitar company to make me an acoustic guitar that I’d like to sell to my fans. They’re gonna have a great time playing my songs over it and even sing to them.” 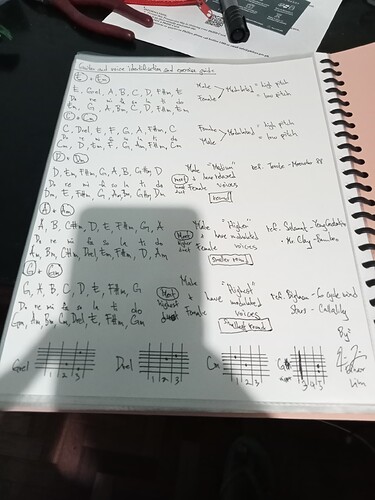 My Guitar and Voice identification and exercise guide.

I made my own guitar and voice identification and exercise guide today. I just had the idea of making one and I was happy to do it because I know it’s one fundamental that I really didn’t understand before on how it’s supposed to help me in playing music. This is usually done on the piano. This can be my contribution to music. I’d like to think of it that way. It contains improvised chords too. It’s not one that is taught but this is personal. If it can be used by others why not? While I was doing this I was thinking why didn’t I think of this when I was younger when I was introduced to the guitar and bass guitar.

This picture is touching. I’m sending a thought for each person waiting 🩷 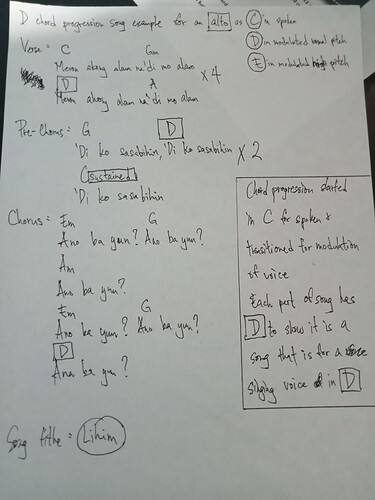 I wrote this in continuation of my guide. It’s part of it and these are what I think how I do music now. However, I didn’t know it was this way for me when I made my songs. I am not a great guitar player but I know these are the basic fundamentals of music. I was thinking of how much time I have put into other things in my past rather than to focus on just one thing I really like to do. If I just understood these in the past I could’ve just done music over and over. I was taught but this was not part of it. I was just the one who understood these just recently too.

Make your first song if you may. Having someone that really teaches music is way more better. This is just improvising with what I have understood in making a song.

They are “codigos” if you may want to have it named. If you liked it don’t forget to play my songs over at apple music or spotify to give support to me. 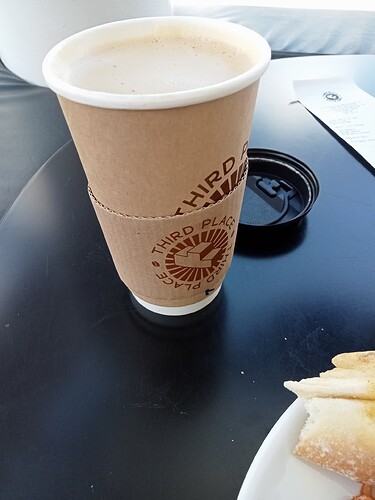 A Coffee from a food and beverage establishment or restaurant.

The name reminded me of being part of the third place for promotion of Trece Martires by inter-collegiate level. I remembered how much team effort everyone made for the said competition. Those were the days I was still okay in my studies. I remembered how I chose the wrong things over what was supposed to be. Some part of me remembered how I should act. The truth is I am really way off of everything. Lazy with my life. Somehow things made me rethink and catch up to what I am currently being. However I was being made fun out of. I’ll just keep on being like this and not let anyone make fun of me when I do not make fun of others really. If I was able to make it big like having regular work I could’ve been frequent on experiencing these. The days are closing in and I’m looking forward to my next step. Maybe that will put an end to what I am always experiencing whenever I go out. Having a spouse.