Relapse… but not too bad. Resetting now

Over the weekend I relapsed. I had 3 oxy, 3 Kratom gummies, a glass of wine and a beer. So I didn’t go off the deep end completely (I rarely do)… but for a minute I was trying to fool myself that this wasn’t really a relapse because I didn’t buy anything, so I am starting fresh today. I almost convinced myself I didn’t have to reset my timer because it wasn’t a full on relapse. But F that, it was a release, so I’m starting fresh today.

I know why this happened. I had an open door in my mind. The fact that I don’t completely loose control like many people, I don’t risk my life or my job or my relationships, gives me this stupid little window to say that it’s not that big of a deal, but it is. I found myself getting incredibly irritated with people this weekend, literally flipping them off behind their backs. This never happened when I was sober. I did have some fleeting moments of elation, but then I was agitated and irritated and ashamed. It really is not worth it at all! Maybe I needed to see that clearly so I don’t always have this idea in my head that “just a little every now and then” is actually okay. Fuck that.

Thank you all for your support

Weekend is past, does not matter now. Today is Monday, a new fresh day begins.

So, let’s try this person, be sober. We also have to forgive this person. We should forgive ourselves. Forgive yourself. Everything is new from today!

I don’t risk my life

We all risk are lives if we put the poison into us, don’t beat yourself up just start again BUT don’t forget our AV tells us lie after lie, we aren’t that bad, you can have one etc etc

I don’t risk my life

That is what I always told myself. Problem with that, I was slowly destroying everything…even my health. It was exactly like the saying, death by 1000 paper cuts"

I also had the thought process when I relapsed, it wasnt so bad. Until I changed that way of thinking, i never got sober.

Once I treated any relapse like it was the end of my world, I stayed sober. I found ways, to fix what needed to be fixed and do it without drinking.

It happens, it’s really a part of recovery. The first time I quit drinking I was sober nine months December 20, 2016 and then relapsed thinking I could have one drink and be fine, that didn’t happen. The second time I got sober I earned my one year coin on February 22, 2022 and the day after I thought I could have at least a couple drinks because I’ve been sober for a year and it wouldn’t be that bad and I drank up until 4 days and 20 hours ago and I now know that I can never have alcohol again ever in my life, in order to be healthy and happy and successful because i am an alcoholic and will always be an alcoholic

It’s true. Minimizing how serious it is is what’s keeping me stuck. I saw so many things improve and open up in those 3 weeks of sobriety. Relapsing means throwing all of that away.

Very insightful. Everyone’s level of addiction varies. Just because your life isn’t total chaos it doesn’t mean that you don’t have a problem. I’m glad you realized that and are getting back in the saddle today.

Using those substances is simply not an option for people like us.

Required reading for any relapser:

From one Kdog to another, i can relate. Last time I took a drink of alcohol after having some sober time under my belt I feel like I literally lost a year of my life to alcohol. 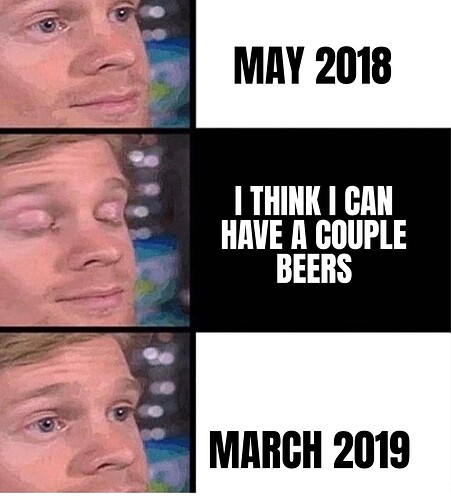 It would be funnier if it wasnt real lol. Fuck it, i paid the tuition for that lesson and i dont like paying twice.

Awesome job on 5 days sober, this is a great forum. Helped change my life. Take care

I found myself getting incredibly irritated with people this weekend, literally flipping them off behind their backs. This never happened when I was sober.

Now I don’t know if this was the day after using or exactly what the setting was but this is something that really turned me off to pot when I was a regular user. I found that even though pot heads have this reputation of being so chill I was an irate asshole whenever I wasn’t High. When I was high I was probably too indecisive to really be considered truly kind I just didn’t want a hassle of any sort.

Being sober means I’m much more level than I’ve ever been it’s not the highs and the lows. it’s consistent for me to make whatever I want and not be subjected to such strong internal changes.

I personally disagree with the whole statement of it’s not risking your life because weather somebody shoots heroin and dies immediately as a byproduct of that action or if an addict takes their drug of choice and slides right down that pathway till death, it doesn’t matter whether it happens in 6 minutes from suffocation after 20 humiliating years from cirrhosis. death, from our drug of choice is still the outcome. Don’t get me wrong, no judgement and I’ve said this before to myself while using and struggling and such to rationalize.

I often like to think of life without time because I feel like time trips us humans up a lot since we can’t predict the future we only see what we call Immediate ramifications but the ramifications that are prolonged are often more profound. Death from a thousand paper cuts is a fucking awesome statement because it truly outlines of labored death instead of an immediate one.

Excellent job in noticing all these things about yourself and thank you very much for being so open and for sharing this relapse. Take care

Life without time, I like that. Time is an illusion anyway, apparently. I look at my mom and see how she’s still caught up in all her addictions at 76… I’ll be there in the blink of an eye if I don’t get my shit together (nod to your meme which made me lol)

Many of us have found it easier to avoid relapse by getting rid of drugs and drink around the house. When it’s time, you’ll be ready to go to any lengths without reservation, including trashing the stash. If you quit, you don’t need it

I was trying to fool myself that this wasn’t really a relapse because I didn’t buy anything,

Oh the lies we tell ourselves. Mine was “I’m a war veteran. I earned my right to drink all want”

I think this is some good reflecting, resetting was a wise and honest choice.

I used to think it wasn’t “that” bad because I knew people who were way worse off than me. I had a job still. I was fairly functional and my relationships were “fine”. That was a slippery slope for me, and a load of total bs honestly lol. When I look back, I was miserable and life was much more out of control than I could see with my addicted mind. Today I have a new found happiness, peace, serenity and freedom in my life that I’ve never before had. All the fears, worries, frustration and chaos I had in my life has been replaced by WAY better things by staying sober and doing the inner work to clear out the clutter that I never even knew I had that controlled me way more than I realized.

Well done on resetting, getting honest with yourself, reflecting on that and coming here to talk about it. That’s the start of walking the path that will help you to really change things.