Why would drugs be so appealing to people? (Trigger warning)

Why drugs be so appealing to people?

It’s hard for me to understand, because here’s my take on them:

I tried many drugs. The euphoric effect alone in my opinion is not a good pay off, in comparison to feeling of down - depressive mood, anhedonia, etc., once the aftermath of come down happens.

With this in mind it’s beyond me why would people prolongly use drugs.

Please help me figure this out

Why do people follow their passion to climb Mount Everest? Why do people stay in school for 8 years to be a doctor.

It’s what drives them.

Doesn’t have to make sense to you, just to them.

And that I know you understand.

Accept the miracle that what charges one person doesn’t charge another.

Only time I came down was IF I slept.

Everyone has different reasons for using. My issue was I used them and I enjoyed it. Once I was hooked, I was hooked and I ended up using them just because I used them until I ended up hating them and realising that I wasnt getting anything done and my own pig-headedness to what other people were saying to me was going to end up getting me killed.

Eventually, with addictions whether it be drugs, alcohol, sex, gambling, shopping etc… you just have to get to a point of where everything clicks into place and you realise that what you’re doing isnt working. For some people, they sadly dont get to that point or they do but reconsider. For some people, the hangover, the debt, the shame, the smell, the lies and the never ending cycle of depression is worth it for a few hours of falsely chemical induced euphoria and “it’s alright. I got a baggy in my pocket, I can get loaded later on and just forget all that shit for a few hours”.

When we our down to our last “fuck it”, we usually need someone to remind us (if not ourselves) that that last “fuck it” could very well be the one that ends it all but if you keep hold of that last “fuck it” and just work through it, it’s pretty much guaranteed that you wont feel the same tomorrow. If not, they’ll kick your ass.

Different people respond to drugs in different ways. It has appeal to some that it does not for others, or there are reasons why people take drugs anyways when the idea seems unappealing.

Especially in addiction. With addiction comes compulsive behaviour — it just feels like you have to use. Even if you don’t like the feeling anymore, even if you have no money, even if the idea makes you cringe. This is due to changes that happen in the brain when one becomes addicted.

There’s also the idea of dynamic inconsistency. When faced with a choice, what a person chooses may depend on when. The brain naturally has a bias towards immediate gratification, along the lines of “a bird in the hand is worth two in the bush”. After a brutal week, that release or that high now receives more weight in the decision making process than the consequences that happen later. And if you’re one of those people that drugs affects differently, that pull can be very strong and difficult to resist. This is why methods like “play the tape through” are helpful, they counteract this bias towards the now.

I couldn’t have said it better myself. 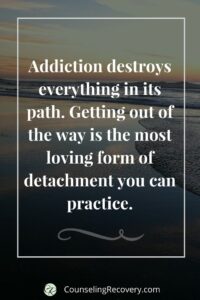 It use to make my situations seem better while in the influence.
Mainly it was cause i grew accustomed to them.it use to be a shared a experience while i was in an relationship.it also destoyed the relationship.
An them all i had left was the use an the search for another relationship to make up for the ine i just got out of.
Finding better coping methods has brought me a long way 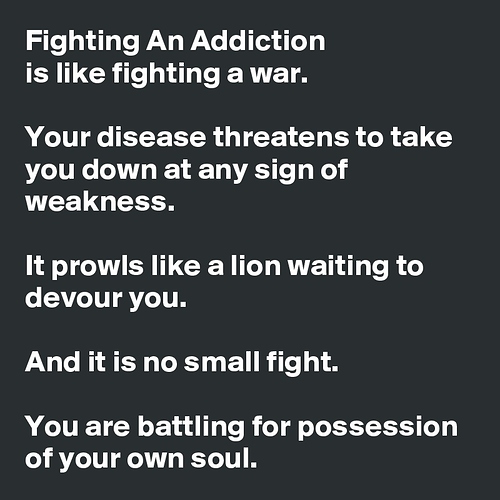 Better off not knowing if the claws (of drugs) ain’t dug into, holding you hostage. Be thankful that this demon is unknown to you. Drugs specifically.

All addictions I believe are a result of pain and trauma.
(Long story)

Escapism.
That’s why I drank too.

My opinion. Drugs and alcohol, for a short time, let us be someone else or take us somewhere else. It’s a very powerful illusion, and appealing to those who do not like themselves or their lives.

For me, it was an escape from reality. (Albeit with severe consequences)

There are nuances to each specific type of addiction, sure – but I think the broader parallels far outnumber the differences.
Addiction is addiction.

Ever try to get a dog to swallow a pill? Drink vodka? Smoke a cigarette? No! They know it’s bad and stay away. They smell the evil. As soon as I light a smoke out back the dog takes off. Doesn’t want any part of it. I know it’s bad and still do it! I wish I was more like a dog.

Animals have an instinct, and that instinct prevents them from doing autodestructive things.
On the other hand - humans have free will to do whatever they want to do, be it healthy or not.

Interesting you say this. I have known many dogs who partake in self destructuve behaviors due to past traumas.

I think there’s this thing called instant gratification to be blamed.
People nowadays get things to be done easily, they prefer to go the easy route, instead of going the hard way.
The result - addictions, since brain reprogrammed to push behaviours towards instant gratification.