Am I overthinking this text?

I thought this person was a true friend, she knows I am giving myself a shot at sobriety. She is a heavy drinker. This text upset me. Am I overreacting?

I suppose she was trying to say “it isn’t her lifestyle”.
I didn’t know that drinking heavily was considered a lifestyle. It’s almost as if she is proud. It’s a habit, an addiction and a bad one… I’m not screaming out from the mountain tops that I’m sober. She has invited me to several bars and breweries and I’ve said I’d rather not and then I get this text. I really held this person at a very high regard and a very special place in my heart so this is really upsetting and triggering are kinds of thoughts of inadequacy and insecurities.

At least they are being honest with you. I had to separate myself from many “friends” to get sober. A true friend just wouldn’t drink, or use in front of you when you hang out.

It’s 100% understandable that this upsets you. But unfortunately, if she is a heavy drinker and not willing to give that up, your paths might very well separate. Also, she is somewhat supportive in saying that she doesn’t want to put you in positions that make you uncomfortable or threaten your sobriety. And since she is not willing or wanting to change her behavior that is a likely possibility that there will be situations that are not for you.

So while it’s a sad situation, it does sound like she’s being realistic and prepping you for a potential reality.

Now you might not part ways completely, I still have friends who are heavy drinkers but I don’t see them much at all. When I do, it’s nice but they aren’t in my close circle anymore.

Then there are some friends that I totally disconnected from because #1 it wasn’t healthy to be around #2 their drinking really disgusted me because of how drunk they would get and #3 turns out we didn’t have anything in common other than drinking so what kind of friendship is that?

There are a bunch of different possibilities. Maybe just see how things progress if she’s willing to see what happens too.

First off congrats on ur sobriety.
I have gone true the exact same thing…
But with my stepbrother. When I told him I was going to rehab his response was, but then we cannot chill anymore. I cried and said is our relation not more then using and gaming then.
We went silent after that. when I returned from rehab 4 weeks later. We have met up to do a bike ride once. After that we called each other obligatory to setup a cinema meet which didn’t happen…

In rehab they prepared me that sobriety might have consequences on your social life.
I have accepted that my brother is in a different phase of his life. I do not blame him anymore, it was MY decision to change and I am proud everyday since.

So no you are not over reacting. But this is another addict trying to reel you back in to your risk zone… Be aware and please be proud of your change rather then feeling guilty that you don’t join her in using.

I don’t feel that way… If they are addicts it might not be in their best interest not to use. I picked up my father out of the hospital within a week he was drinking on a birthday right in front of me.
It doesn’t make him a shitty father, it makes him an addict just like me.

I don’t think you’re over thinking at all. She’s placing conditions on your relationship that are detrimental to your health and wellbeing. She’s being manipulative by giving herself the out: I don’t want to make you drink (but can’t be your friend if your’e sober).

My response would be “so someday we’ll part ways? Hey, no time like the present. Faretheewell!”

Thank you all so much!! I was truly feeling a bit crazy for a moment. We have been “friends” for many years and now that I’m choosing a different path she no longer sees the value in our friendship.

Lots of things are changing this go around for me in my sobriety. If I must lose friendships in the process (and even some family members) of my well being so be it!

Thank you guys for your words and support! I was broken hearted until I read your responses.

For those that aren’t supportive or happy for me, then SAYONARA! Lol

She wasn’t a friend. She was a drinking buddy. Ironically, when we choose sobriety we learn which are the former, and which are the latter.

I’d advise you to hold off on being that harsh.
And leave the conversation with a open heart.
You never know what the future brings.
Who knows… Maybe you turn out to be a inspiration. Later on in their lives…
Don’t burn bridges just take a different route for now.

It feels like TO ME that she’s trying to bully you into going out with her if you want her friendship.
I would write back “I totally agree with that assessment and I wish you all the best”.
*drop the mike

It all started because she has been trying to get a hold of me, but I have been avoiding her because I’ve been under a lot of stress and all she ever wants to do is drink. So I finally reached out and this was the text before the initial text I posted. This will give you all a better idea of who she is. So mean right? 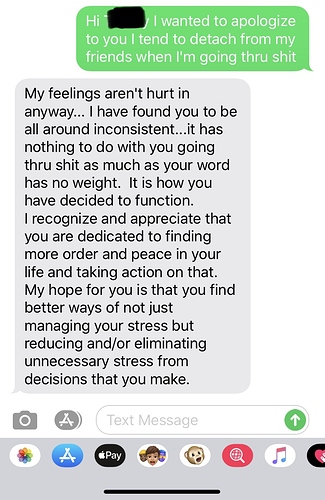 This person is basically telling you they don’t want to be friends. Off with her, then!
You will lose a lot of ‘friends’, you are also going to gain a lot of new friends with more genuine relationships… That aren’t based on using.

I’ve lost friends I’ve had since middle school. Come to find out- they were terrible , and I’m better off without them. It will be painful losing some of them at first, but you will see the good in it eventually.

Don’t lose sleep over it Mopo; I think she will be the one apologizing someday. I would NEVER write that to a friend going through a tough time.

If she feels a lifestyle choice and not the quality of your friendship matters, that’s certainly disappointing. And, I hope, has zero bearing on a choice that’s otherwise brought you health and peace.

I’ve had two friends drift away from me since getting sober. They know I care about them and am here, that has not changed.

We have just found ourselves on different paths.

you are also going to gain a lot of new friends

That message is not from someone who I would call a friend! No concern for you at all and she hopes you can find a way a better way to manage or reduce stress, easy surround yourself with people who support you not someone who wants to put you down.

We all say and do things we regret at times. If you had some good times together in the past, remember those. All friendships change and grow with time, just like we do. Sometimes friendships drift or end, and that is okay as well. It can be scary for friends and family seeing us change and grow and thrive…while we think they should be proud and supportive and happy for our positive steps forward…our changes can bring up their own issues and that can be hard to face.

We are all doing the best we can, where we are at, right now. Perhaps with time your old friend will make some positive changes of her own and you can be there for her, even tho she hasn’t been for you. Or maybe not.

I have said goodbye with compassion to a couple of friends who just are in very different life stages right now and I am okay with that. It hurts a bit, but it is best for me.

It is okay to let people go. It is okay if she is still drinking and you aren’t. This doesn’t make her a bad person or a bad friend. We are all just humans. You are at different places in your lives and that too is okay.

Let her go with as much grace and compassion as you can muster. When our hearts break with a loss, it opens them up and makes room for even more love.

You are overthinking
And yes, your paths will probably take different directions

I unnecessarily ended a number of friendships in the past by drawing lines in the sand and calling people out on what I believed were slights and unsupportive acts.

I regret a lot of that now. It took me years to learn to roll with the ebb and flow of relationships.

Do what makes sense for you, do what helps your sobriety. But I would try to keep doors open.

If your friend(s) drift away, then so be it. Now you know. But this is a time of adjustment and change— for you and for them because they had a different relationship with you when you were drinking. The friendship will change. Some friendships survive that and some won’t.

One of the hardest lessons for me was learning that I can’t place too many and too high expectations on individual friendships or I will always be disappointed. Instead I have learned to accept the good parts and let the other parts go.

I lost a few friends when I became sober. Other friendships were able to sustain my change in behavior (sobriety) but with a different form/ dynamic. And some relationships remained strong throughout the change from my drinking life to my sobriety.

My two cents is not to close any doors and leave a little room for adjustment. And congratulations.

Yes.
In sobriety “we cease fighting anything or anyone”