Checking in daily to maintain focus #42

Back to day one for me. I feel a bit silly actually. I was able to go to the bigger supermarket for a change yesterday and I went to look for some Guinness 0%. They had a whole shelf of alcohol free drinks so I bought a couple of things. Fast forward to early evening and I’m relaxing and feeling good. I decide to have one of the G&T’s I had bought. It turns out it was reduced sugar, but alcoholic. Thing is, I still drank it and then went on to drink the remaining three in the pack.
I was kind of minimising the effect it had on me but I found I was less patient with my daughter, and she was having a bit of a moan and I ended up laughing at her, purely because I was less inhibited, less present.
My sleep was worsened overnight and I have woken up feeling a bit fuzzy and of course guilty that I was not the caring parent that I strive to be.
On a positive note the sun is shining and we have tickets booked for a Harry Potter walking tour this afternoon. I also plan to make a chocolate cake.
Today will be alcohol free.
Have a good day everyone.

Mixed day today, basically nice, but some things I just couldn’t understand and resented, and I got rather passive-aggressive, which isn’t very nice of me, and not effective either. Always AFAF tho

Huge congratulations friend! Hope you and Gunny are keeping well

I agree that passive aggressive is not usually very nice or effective. But sometimes it just feels necessary! Of course it isn’t necessary… But then neither is ice cream

Checking in at day 241.
In months it will be 8 months clean tomorrow, a new milestone. It’s going pretty well I have to say, but since a few days I sometimes think when will it go wrong again? It’s been going well for too long now. Silly huh? The previous times of my sobriety went well until it suddenly went completely wrong. And I don’t see where it goes wrong. Okay, I’ve learned from my previous relapses and know how to act and what not to do but what if new things happen again? Also on the last time of sobriety I already felt like the pause button had been pressed for a while and out of the blue the movie starts playing again and i start to use. It’s not that I don’t enjoy my sobriety or something, I do, so I only have these thoughts for a few days. It keeps me busy but it’s not a concern (I think).
I hope this is a phase. It all feels so new!

Something else that I really really like. My 15 year old son is flying to New York today with his foster father and foster brother for a sort of men’s vacation. I had my son on the phone yesterday he was so excited. He has never flown before and now flying for 8 hours for the first time. For those who didn’t know yet, my son and I live in the Netherlands. We just don’t live together. I am so excited for him!

Wow that is amazing and so inspiring! Congratulations🥳

@Mno Luna is a beautiful cat. I hope she feels better soon after the vet visit🙏

Oh that’s a shame, but easy mistake to make. Sounds like you have the right attitude now though and are picking yourself up. Have an amazing Harry Potter tour, sounds great 🪄

Morning friends! Checking in on day the top of day 7, I made it yesterday and I don’t think I was going to. I cannot thank you @Teresa.13 enough for your support yesterday, it really made all the difference

. I hope everyone has the most amazing sober day!!

That sounds like a great opportunity for your son!

Good morning friends, Kat here checking in on Day 269. Also keeping up with the no nail biting.

Have my second and fourth sons this weekend the 8-year-old is keeping me up lol. Keeping me out of trouble!

Talked to my sponsor yesterday and apologized for my week-long funk, she said no problem just start again. So Zoom meeting tonight and stepwork if I can focus with the kids around.

That’s it for me everybody have a good, strong sober day!

You are absolutely right. It sure is. I hope he has the time of his life❤

Hey all, checking in on day 685. I hope everybody has a good one! 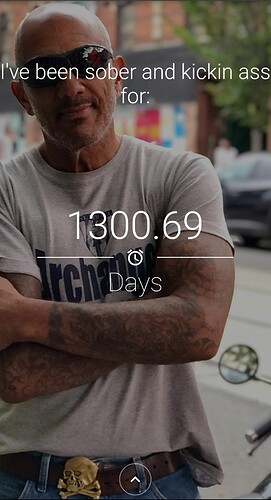 Cecking in on day 118 sober and 899 days substance free. Last night I heard and seen a group people who were drunk and acting the way they were. I wasnt judging them but refecting on my own self. That was me at one point, the way i acted, the words I would use…it made me very happy to be sober now. Its been a real struggle with staying sober, especially with the nice weather here. It’s patio season and that for me when I walk by a bar or a restaurant is a huge trigger. When I go out to eat, am I the only one who has a hard time not ordering a drink?

I’m slipping into a depression state of mind. I’m so anxious and worried about the future. I drank yesterday and feel very guilty. I just don’t know…I’m sad.

Today I will attend my Saturday morning meeting and then try to get back into my discipline mode of prayer, reading and meditation. I really need God to help me. My sponsor informed me that he believes I haven’t accepted Step One yet. So Step One will be my priority this week.

I’m so sad and anxious…just pretty tough. I can’t stand this depression…it is killing me and now I’m crying as I am writing these words.

This community means the world to me…I must continue the fight. Thank you all for accepting me…I’m in rough shape.