Just another flu and the world panics again… Amazing how fear still sells.
Yes, people died - but let’s be honest, most were elderly or people with a weak condition that would have died from any other flu as well.

Another thing to look at is that people are dying in a vastly overcrowded country with poor health care. One that doesn’t take care of the population. One that doesn’t practice the same type of hygiene publicly that more developed countries do. People die in China from just about everything that most people don’t die of in other countries.

The real threat here is truly group hysteria, at least for the majority of us. Look at the stock market!

Some facts I’ve learned… The flu is a Corona virus. The term Corona (when not talking about beer) is a category of virus, an umbrella term. This goes to show that, first off, the media is using a catchy phrase for another version of the flu. 34,200 people died of influenza last year in the US alone. 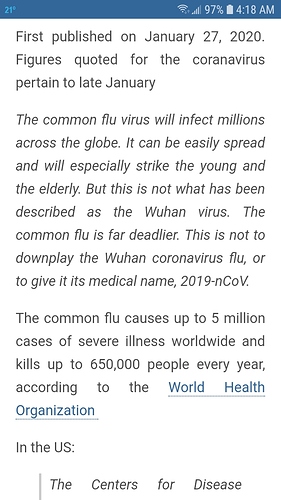 Another thing to think about is that the mortality rate is also being calculated in China. There are probably thousands of people who have it that aren’t sick enough, barely sick at all, to seek treatment.

If we are going to pay attention to this virus, let’s do so responsibly and make sure we know ALL the facts. Causing anxiety and stress in recovery is always a dangerous thing, so let’s try to to focus on the reality of it. Being aware, truly aware, will help ease our fears.

Anyone else having Walking Dead thoughts??

No, but the name of the topic made me laugh and immediately had to think of this

On-topic: The only thing I can do to protect myself against Corona virus is good personal hygiene and wash my hands more than I usually do (20 seconds).

Disinfection gel is sold out everywhere, maybe industrial degreaser from work will help

I think you should all go hoard as many carrots as you can…that’ll save you.

This is the second carrot post I’ve noticed from you… what’s their significance or secret super power?

I keep reading here only sick/elderly etc die. I thought many healthy folks were dying too? Including the young healthy doctor who warned about the virus?

Well carotenemia isn’t fake news… I’ve had patients who had it. I could use some colour though so maybe I’ll give it a go

I think there is way to much made of this , I think it’s all about money

Try to remember that the majority of cases result in very mild cases. Sore throat and dry cough. Very few get serious infection or death.

I totally get being nervous because this new but more than the virus I’m worried about daily life disruptions. I’m going on a cruise for March Break and yes, there is a risk of outbreak I’m really more worried about getting quarantined for 14 days.

Thank you all for sharing your different perspectives, as well as the humor. Such is the shared human experience. Have a wonderful zombie-free weekend! Brains… brains…

I’m not worried, what will be will be. If that’s what takes me out, well, had a good run!

And honestly, if you were to get it, now would be the time while you would have the full attention of the medical community.

I don’t get the flu shot so I’m really living on the edge.

You are soooo level headed pal

Wellllll, it is a coincidence that he died from the virus. Some call him the “whistleblower”.
He made China look bad, and he died

That would be gravy…

Therefore I’m gonna proceed with precaution as usual, nothing more a person can do really… I’ll be avoiding seafood and bats (except for the one’s on here, they’re cool

) as well as the public when I can (personal preference) until more information is available and more so than that, time proves we’re in the clear… A vaccine will take time to build and time to be approved by the FDA (some folks have to die first)… I have trust issues…

That Swine Flu that hit about this time of year right when the weather warmed up hurt like Hell!!! I was traveling for work to a seminar in higher elevation… Had to hold my head just back to breathe… Had the shot, the strain wasn’t covered… It helps to know the family I guess 🤷 if you want to understand where things come from and what they turn into… This is the Flu I had that year…

The swine-origin influenza A (H1N1) virus that appeared in 2009 and was first found in human beings in Mexico, is a reassortant with at least three parents. Six of the genes are closest in sequence to those of H1N2 'triple-reassortant' influenza...