Got a two-fer for you. I was originally looking up how many people die by Champagne corks per year (24 to be exact). Be careful, those corks are clocked at around 55 MPH (88.5 kph). Should be no problem, since most of you are sober nowadays, though here’s an additional reason for you. Anyway, in my search for that answer I came upon something way funnier.

Clement Vallandigham, an American politician and leader of the Copperhead faction of anti-war Democrats during the American Civil War. He died in 1871 in Lebanon, Ohio, at the age of 50, after accidentally shooting himself in the abdomen with a pistol. He was representing a defendant, Thomas McGehean, in a murder case for killing a man in a barroom brawl in Hamilton, Ohio. Vallandigham attempted to prove the victim, Tom Myers, had in fact accidentally shot himself while drawing his pistol from a pocket while rising from a kneeling position. As Vallandigham conferred with fellow defense attorneys in his hotel room at the Lebanon House, he showed them how he would demonstrate this to the jury. Selecting a pistol he believed to be unloaded, he put it in his pocket and enacted the events as they might have happened, snagging the loaded gun on his clothing and unintentionally causing it to discharge into his stomach. Although he was fatally wounded, Vallandigham’s demonstration proved his point, and the defendant, Thomas McGehean, was acquitted and released from custody (only to be shot to death four years later in his saloon). You can read about the guy here.

Tetrodotoxin is a potent neurotoxin derived as a byproduct from certain types of symbiotic bacteria. These bacteria are frequently found in marine animals such as: Pufferfish, Cuttlefish and Octopuses (especially the Blue Ringed Octopus), Angelfish, Porcupinefish, Moon Snails, Ocean Sunfish and Triggerfish. It also includes certain species of Xanthid Crabs and Starfish, several species of toads and newts, and a variety of different types of worms.

The neurotoxin is dangerous, because it inhibits sodium ion channels from firing, leading to paralysis of muscles. This can be fatal in certain doses. One can develop insensitivity to it as seen with some types of garter snakes, who prey upon newts with the toxin.

Some of the most notable deaths from Tetrodotoxin are found in the preparation of Fugu (Pufferfish Sushi). This was depicted in a famous episode of The Simpsons once. If prepared incorrectly, the neurotoxin can be accidentally introduced into the food, sometimes leading to death.

Was just curious about crystals (magnetite, calcite/quartz) in our brains after watching a documentary on Tubi…

The Sun’s mass takes up 99.86% of the solar system. It’s so massive in size that by comparison, it would take 1.3 million Earths to fill it up.

I had no idea Africa was this darn big! 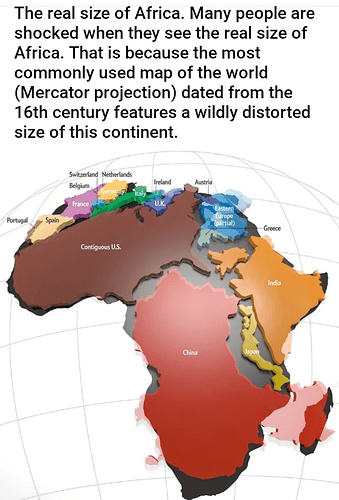 And here’s a widely hated topic…

Caffeine. Caffeine acts as a neural stimulator of the Pituitary Gland. This the brain perceives as an emergency response stimulating the adrenal glands to produce Adrenaline. The artificial stimulant often becomes addictive, simply because excessive and repetitive use depressed the Adrenal glands ability to function normally. The now impotent Adrenal glands require additional artificial stimulation to produce Adrenaline and the subsequent Dopamine release. This is known as Adrenal Insufficiency. The use of these artificial stimulants (which could be other substances other than Caffeine. i.e. amphetamines, heroin, etc.) additionally causes Cortisol production in the body, which can cause increased bodily stress and inflammation.

So, not to point fingers or cause a fight, but the habitual use of Caffeine could be seen as a replacement drug in some instances.

100% agree that is is a substitute. Once I hit 6 months nicotine free…caffine is next.

Slowly improving your health, one step at a time. It’s so crazy to me to see people so proud and vocal of their sobriety, yet they down 8-10 cups of coffee a day. No judgements though. I’m not the picture of health. I try to eat healthy, exercise regularly and limit things like caffeine, refined sugars and processed foods. I’m not always good at these things, especially with the latter two.