Other people bothered by your recovery?

Sadly, on here it seems that partners and family and friends are often those that directly and openly facilitate addictions through supply and encouraging use.

I wanted to ask if anyone has experienced something slightly different; people in your life who complained about the addiction and your use, being apparently bothered or intimidated by your recovery. Do you have a spouse or sibling who secretly enjoyed the fact you were a mess and now feels a bit insecure? Do you start to see someone you once thought was stoically tolerating your problems as part of a bigger issue?

Not sure if I’m answering this with the answer you are looking for. But my very best and closest friend completely turned his back on me when I started to get serious about getting clean and sober. We grew up together, and screw up together, we’ve always been like brother and sisters. I had no one just as close as he was. We started doing drugs together much to young, but we also stopped together. And turned to alcohol instead,with many half ass attempts to quit. And for me a lot of slip backs into my doc in the shape of dieting pills which he used to bash me a lot about. Finally I took the step to get serious help because I got tired of being the way I was. And with our history I was sure he was there to support me. Which he made clear that he wasn’t, he actually stopped any kind of contact,which was a hard hit. Eventually somewhere in the middle of it all he wanted to have a chat and I was worried because he usually was the one making us get wasted beyond all recognition. It all went well, we had some kind of heart to heart talk and he claimed that he was going to get sober with me. It only lasted a short while, we broke contact one again, not completely though because this guy works with my husband (small town hard to avoid) he started to skip work and after not so long he was back doing drugs, so my husband refused to work with him. We haven’t lived in the same town for decades me and this guy, but now he’s about to move back within walking distance from my house, in like two weeks. For what I know he’s still doing drugs and have started drinking again. We haven’t talked about it, last time we did after our heart to heart talk he didn’t wanted to come visit because I was still sober. When I relapsed he took it as it was all party on once again, and got upset when that wasn’t the case.
He is supposed to start work with my husband again after he moved back to here.

I wish he would stand by my side, like we’ve always done but it seems out of the question for now. I know it sounds like an ugly love story, but we’ve never been romantically involved. I do love him dearly but not in that way. We’re born just a week apart so seeing him this way is like watching by own bad side in the mirror doing all things I’m trying to avoid, with all the bad traits showing.

Time will tell how it all ends I guess.

I certainly think there were times that my husband enjoyed the perks of me being sorry and meek. When I am sober I can pull him up on his issues (he is not an addict, but can be controlling) and he can’t turn round and use my drunken failures as ammunition. He has got less controlling as my sober time gets longer, to be fair.

My boyfriend saying “don’t you think it’s time to take a break” was the push I needed to stop drinking. I had been thinking about alcohol being a problem for a while but hearing someone else say it made me take the leap.

He only really meant a month or something but I found this community and leaned in! He has only said once that he misses me drinking and he was drunk at the time.

My hubby never mentioned my drinking and when ever we went out and I was trying to not drink I would offer to drive (husband doesn’t drink) and he’d say,”no, I’ll drive you relax and have a drink.” Not blaming him for my drinking at all, that was all me but he never said anything??? At first this made me cross but the guys on here said that if he had of said something then I probably wouldn’t of received it well… we’ll never know now

. All I know is that I’m 420+ days sober and he’s really not liked it that much. I feel it’s like he wanted me to be a piss head sat in my arm chair night after night because I WAS HERE FOR HIM. Hope that makes sense?? I honestly feel that that was easier for him. Now I’m sober and I’m never going back it unnerves him. I am slowly starting to realise MY power and if I want it I go get it and if I want to go somewhere I go! This really stresses him out. He’s convinced I’m going to leave him and he’s very needy at times… but I have to focus on me. How he feels and what he wants are not my concerns…(obviously I care what he thinks and feels just not to the point of it coming first) I have no plans to leave my hubby but if I wanted to I would and could!

And that my friend is fucking liberating! Some people try to hold us back because they are scared…well I’m sorry but I gotta do me and the rest will fall into place, this I know. Hope that’s not too much of a un-sense-icle rant lol. Great question!

This is what I mean. Just a word, just a concern. My hubby said nothing!

I suppose I was the opposite, my drinking wasn’t good for him cos I was going out without him most of the time!

My misses is against AA, TS, anyone I talk to, praying, God, offers me drugs says I should drink, says I don’t have a problem, says we are drifting apart,smokes weed, drinks alcohol.there are drugs and alcohol in my house 24 hours a day.
This has been the same for the last 3 years of me quitting and relapsing but the last 3 weeks and since I got a sponsor she has not complained once, actually she has once but I think the penny has finally dropped. Maybe she doesn’t want me to bad mouth her to my sponsor

As the saying goes

It’s funny the ripple effects us getting sober causes though. I’m glad he said something to you and I’m glad that you’re here with us. I find you a great presence and support here

This whole boundary thing is a monumental discovery!! I honestly can’t believe how empowered I feel most of the time. I’m still learning and figuring things out with wobbly legs but I’m totally 1000% better sober! You guys are my “lean on”… I really and truly rely on you guys and this place so much. I read, read and read…we have all been through so much and having this place to share safely our experiences, without judgement is life saving! 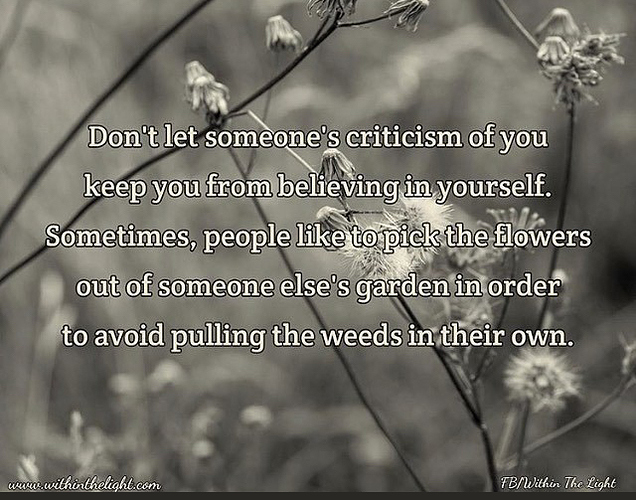 This is so how I’ve been feeling for the best part of this year. Just “fuck yeah! This is me, I can do whatever I want!”
Obviously I remember I’m married and have my responsibilities but I’m not scared to try anything at all. If I find I’m rubbish at something, well at least I tried and found that out instead of living, wondering.
It’s not falling, it’s learning.

For sure. I’ve done all sorts since lock down the best being I built a limestone border wall around my garden. Neverin a million years did I ever think I’d try limestone walling but I did! Flippin ek it was hard work but I bloody did it!

never again tho lol. Xx I’m just ready to grab life by the bits Geoff! Shame about covid but at least we are safe and warm and steady and sober. It will pass and then there will be no stopping us!!

Yes…There is a stigma to addiction and people might classify as a second class citizen like a crimimal.

There are others who drink too much and your sobriety indicts them in this way. That mentality is rooted in selfishness.

Others might think you are a party pooper who runs their fun or you have nothing in common anymore.

All sad but true. Others have been bothered by my recovery yes. Especially now that I have over two years in and they know I am committed to it…

In my recovery I wen from an asshole, to someone who tried to be as politically correct as possible. People took the piss out of me for being politically and trying to solve every argument. I thought I knew everything about how to communicate for a long while. People hated it. Not surprising lol since I was a know-it-all ass.
Now that I’m becoming my own person and not the person my rehab wants me to be, people are liking me more again. But there’s still a couple people who hate that they lost their best player in their games and try to get me to game

I have no idea. Nor is it my concern. I guess if they wanna let me rent some space in their head that’s their call.

I’ve not experienced anyone directly saying that they have a problem with my sobriety, but I have a couple of close friends who were clearly uncomfortable with me talking about it with them. One even hung-up on me when I tried to open up to them. Incidentally they are both very heavy drinkers. Funny that eh. I don’t speak to them anymore.