I gain so much joy from watching critters near my home and chatting about them. I couldn’t find a wild animal thread so I thought I would create one.
Show us the wild and domestic animals you admire or get joy from and let’s hear all about the little critters

Just learned that scrappy is a scrappette and I believe I’m gonna be a squirrel grandma. I dont feed them but I do provide water. I love the wild tree squirrels where I live. 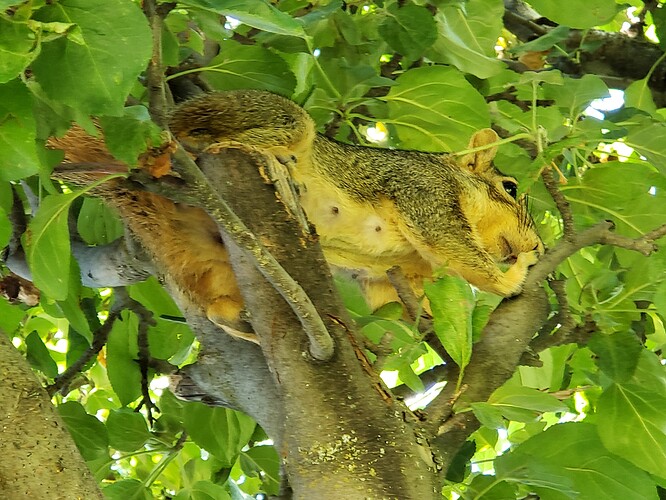 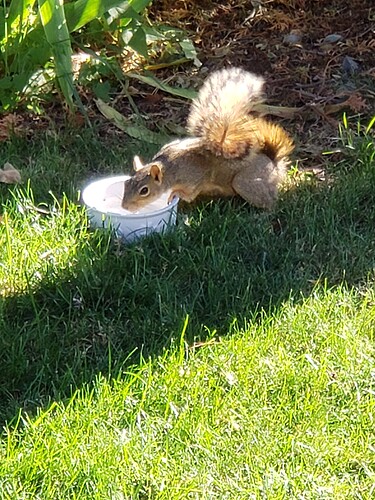 This is Earl. He scales the house stone to get to higher story windows too. My dog has a high prey drive and they have a stare down often lol. He gathers walnuts that’s fallen from tree and hides them everywhere; on bbq, window sills, rocking chairs etc.
This was the only time that I fed him as I don’t want him reliant on us for food. 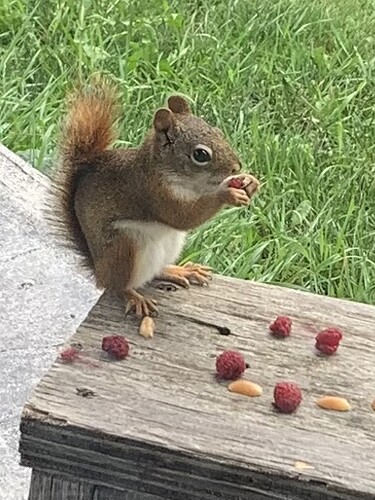 Earl is ADORABLE! I love watching little critters around my home. Thank you for sharing

This is a few years old. Photo caught with wildlife cam back of property. Healthy looking coyotes! 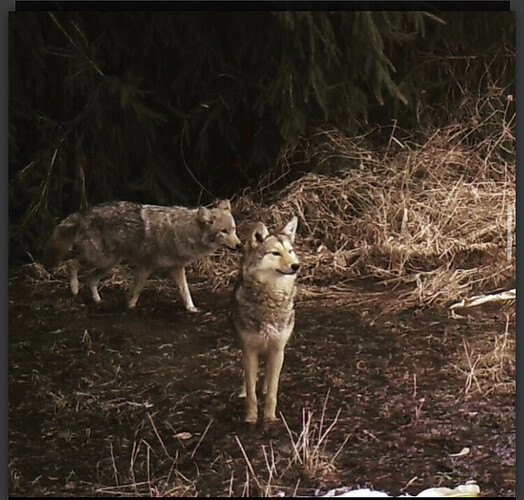 I love watching little critters around my home.

Same! I need new binoculars lol. Looking forward to fall/winter to get bird feeders set up

Oh wow! They are beautiful! I’ve seen very few in the wild. Ive seen foxes in Montana but I dont often glimpse the bigger wild ones.
I’ve thought about getting a wildlife cam. I dont live in the woods but in Montana the bears don’t stay in the woods lol

About 7 years ago, the lot next to ours was finally developed. It had been the last open flat corridor between a ravine with a brook running for maybe 5 miles and 400 acres of berry fields and forest.

After the house went up, the family band of coyotes that I had heard and seen for about 20 years disappeared. And the local rabbit population boomed.

I love seeing wild critters! I don’t have any current pics, but while I was visiting family in Kentucky this past weekend I saw two young red foxes playing in someone’s driveway at dusk, as well as two still spotted white tailed deer on the side of the road that scared us and we had to slow down fast. They were the cutest babies!!!

The last time I was there, my dad had been using a live trap to try and control his grey squirrel population (he has gotten permission to relocate big males to county park property) and he forgot to set off the trap before nighttime. We woke up to a huge upset possum. At least he got a tasty peanut butter and banana treat for his trouble! Released it and it clung to the trap with its little human like feet, poor thing. Finally got it out and it wobbled off into the brush. I love possums, to be honest, and they are so important to the ecosystem. I did grab a pic of this fella!

That’s what my dad’s problem is with squirrels and the lack of predators. He is hoping that since we saw foxes and they have started hearing them at night again for the first time in a decade that they are on the rebound.

Awwwww poor little opossums bet he/she was happy to get out of there lol . I just love them. I grew up down in OK and I always liked them. We used to go spot lighting at night just to see what kind of critters we could see.
This picture sure brings back some good memories for me

That reminds me of Ralph

So when I first moved to Harrisburg, I was staying with a friend. She had a few cats that floated the neighborhood that were just kinda strays that hung out who got spayed and stayed.

So she’d feed them, and one night all of a sudden you heard all this racket, turns out it was a opossum that decided he wanted cat food too. Needless to say it made a home under her deck, and since he was just so damn noisy and always upsetting the deck we named him Ralph from wreck it Ralph

Ha! Fun. Was he noisy as in the screechy sounds they can make? Or just messing with stuff under the deck?

Just messing with stuff he would always knock the food bowl over, he will hiss and screech at the cats, we had this huge Tom cat that would hang around that you could tell was in his fair share of scuffles in his day. And he’d even be like nope I ain’t fucking with that thing no way

Thats an FAFO squirrel stance if ive ever seen one

I love my silly Gamble Quail. With their tuft of feather sticking out their head. And they’re so clumsy when they try and run away from you. They’re hilarious to watch. 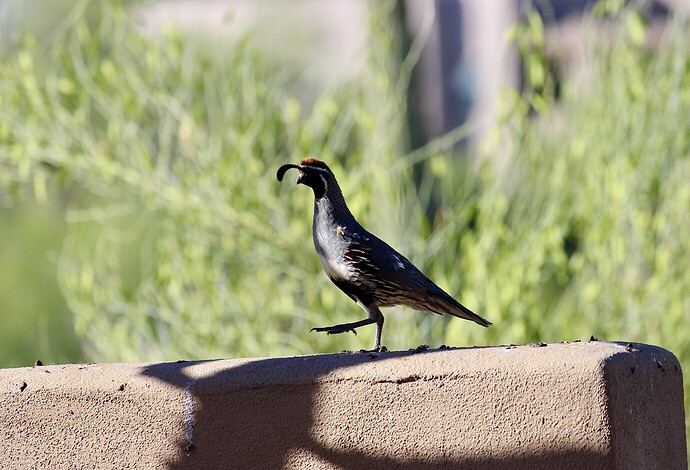 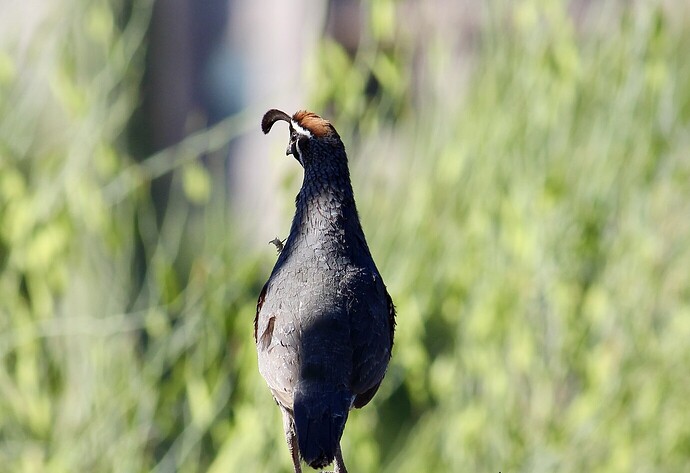 And we see plenty of Ravens around. 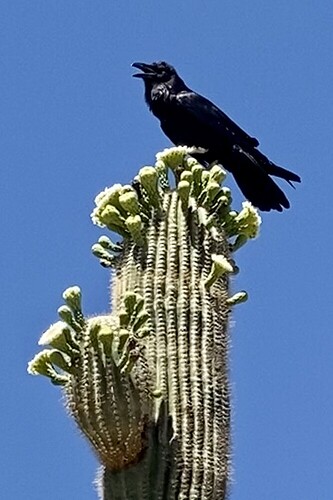 There’s a lot to see in the desert. It’s really fascinating. I’ll just start with a few.

I’ve never been to the desert. No doubt I would be taking pictures and watching the wildlife for hours on end. Those birds are ridiculously cute! How could you not watch them!?! Lol

I’ve always had a soft spot for the Opossum. They’re wonderful creatures, and do much to keep the tick population down.

I feel really old now that it’s my time to bird watch.
Caught this great horned owl one morning. He was around for most of the spring. Haven’t seen him over the summer. 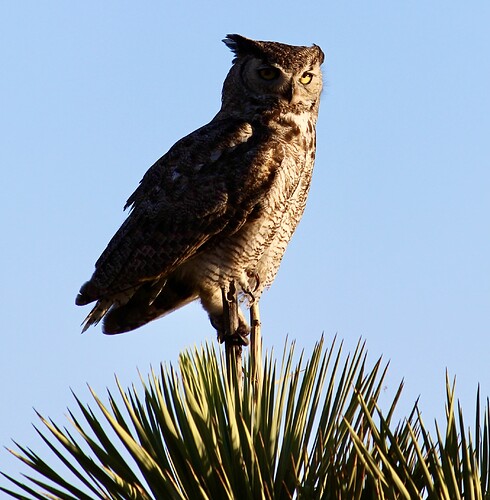