even a wall has another side to it, like adding 1 more to any #

The DAWN mission found organics in the asteroid belt - and explored for water on dwarf planets there - and it has a connection to TIE fighters!

Dawn was the first mission to orbit a dwarf planet and the first two orbit two bodies in the main asteroid belt.

This is epic. Thank you I for sharing. What did they say to you if it’s ok to ask.

Outstanding, I love it all but the discredit part especially.

A pet peeve of mine is the misuse of “theory”. Theory is an explanatory framework, not an hypothesis or a possibility.

So the big bang theory is not just “Oh, we think this happened, and look at all the evidence to support it!”, it explains how the universe is expanding, how there is a finite set of elements, what the implications of the conservation of matter and energy are in an expanding universe, etc.

All things, if attributed to the correct theory, are “theoretically” true - that is the theory predicts the events accurately. A conspiracy theory never (and I mean never) accurately predicts events - it confounds causation and correlation and ignores a fundamental truth of the universe and all we know about it - the principle of Occam’s razor or the law of parsimony.

So theories explain things, hypothesis are to be proved true, false or unprovable by expositions of facts, and confirmation bias exists and operates on all people.

Thank you for sharing this post Dan. I deeply appreciate this - thanks

I’d planned on making this post when the autumnal equinox happened a few days ago, but being sick got in the way, so I’m posting it now.

The bi-yearly equinox happened on the 22nd / 23rd, so the beginning of spring in the southern hemisphere and autumn in the northern hemisphere. I highly doubt there is anyone in this thread who doesn’t know how all this works as far as seasons and the like, but who doesn’t like a good info-graphic picture or two? 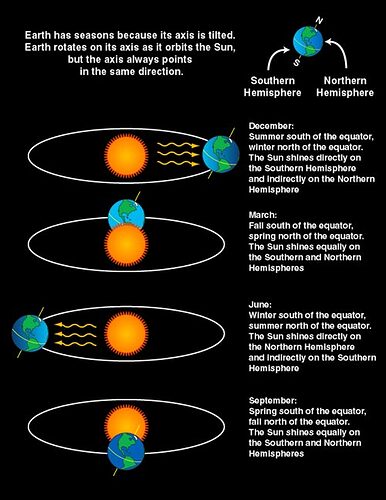 Here is another thing I thought was interesting which happened at the same time. In astrology, when the autumnal equinox is ‘exact’, and the precise moment the season changes, the sun is at 0 degrees and 0 seconds of Libra. There are astronomical ways of noting these coordinates as well, in case someone is interested and wants to look them up for their own information. Anyway, as the sun moved to this position, Mercury was at 0” and 29’ of Libra. It is currently ‘retrograde’ (which is actually simply an optical illusion from our perspective on Earth), and only 5 hours and 43 minutes later the two of them were exactly conjunct (together in one spot). “Exact” in terms of astrology, and as exact as they were going to be even though Mercury was 2.9 degrees SSW of the sun from the earth’s perspective.

Most people have heard the term “Mercury retrograde”, even if they don’t know much about it. Astronomically, as I said before, it is an optical illusion like one car driving past another, and for a moment the slower car looks like it’s not moving and then going backward from the viewpoint of the passing car. All planets have a period of “retrograde” from the viewpoint of the earth. The planets beyond Earth (superior planets) are always “retrograde” when they are in opposition to the sun. 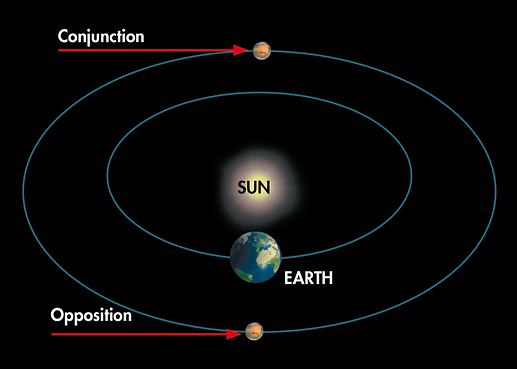 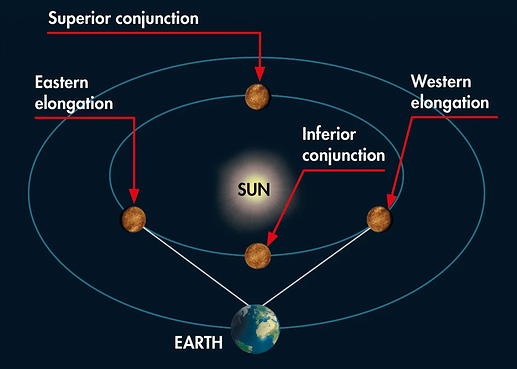 Astrologically, there is much to be said about the difference, but I’m not going to go too far into that because when we start going into the meanings of these things we begin to deviate from the concrete/visible astronomy and wander more into the ‘spiritual/energetic’ realms. However, I do think that it’s interesting that the two happened together in such a short period of time. Going into a new season with the sun’s equinox and the inferior conjunction of Mercury with the sun begins a new cycle (think of the new and full moon as an example for simplicity—the inferior conjunction of Mercury being the ‘new moon’, the superior conjunction being the ‘full moon’, and then the cycle completing and another beginning when Mercury comes back to the inferior conjunction).

When viewed on an astronomical level, these conjunctions are the point where both Mercury and Venus change from an “evening star” to a “morning star”. I also think it’s kind of interesting how the planet of information and communication (Mercury) can’t be observed when it is conjunct with the Sun (which represents one’s ego), but only when it’s further away because often we get become ‘blind’ to something when we are too close to the issue, and it’s with separation and distance that we are able to see things clearly. Like how after being sober for a period of time, we can look back and realize certain things that we just couldn’t see while we were in the middle of the chaos of addiction.

But anyway, I thought it was interesting and wanted to point it out. Of course, we just had a new moon just a few hours ago, and Jupiter will be at an exact opposition from the sun tomorrow, which makes right now an excellent time to set up a telescope and take a look!

I’ve clearly missed a lot of discussion over the past few days while I was sick, and I’m going to just write one reply in an effort to catch all the comments that were directed my way instead of breaking them up per person. I’m still not feeling great, so if I miss anything from anyone, it isn’t intentional.

One thing I really appreciate about this forum is the variety of views and knowledge levels each brings with them. I would definitely enjoy having in person discussions with quite a few as written communication has its limitations.

Lastly, @TMAC, everything related to the topic is welcome! Do not deprive us of your humorous alien posts!!

Still I think the word “religion” is used so selectively as to be not particularly helpful here. A better term would be “dogmatic fanatic”:

Dogma (you could qualify it with the adjective “self-righteous dogma”):

simply believing what they are being told as if it is the final arbiter of truth, and anyone who may have different views, ideas, or who simply question are “otherized”

Fanaticism (you could qualify it with the adjective “violent fanaticism”, or other adjectives as appropriate to specify; they are all different flavours of fanaticism):

The “believers” feel they have the right to scorn, belittle, hate, or on the most extreme level, to physically harm, the “unbelievers”

If “religion” is used to mean “dogmatic fanatic” and in particular “violent dogmatic fanatic”, you’d have a hard time convincing me that many faiths and traditions across a wide range of humans fit that definition, for example Buddhists, Unitarians, Sufis, many people raised in traditions of the Indian subcontinent (the term “Hindu” is often used but that’s a Western term that lumps these diverse groups together), Bahá’ís, many Christian and Muslim friends I have, etc etc. I personally have friends in all these traditions and none of them are dogmatic fanatics.

All to say, saying “we make science into a religion” lumps a whole lot - hundreds, at least - of constructive and highly diverse (and inquiry- and reflection-based) traditions into one pot, and far from deepening your point, it obscures it. The water is so muddy now we can’t see through it. These religions are not all the same in any way, and many of them teach precisely the kind of respect and humility that creates conditions where science flourishes.

Why muddy the water? Why not just say what you’re saying? “We make science into dogma” That’s what you’re saying. It’s an important and sobering question and one that needs careful consideration: how can we foster scientific cultures that resist blind, unthinking, clannish repetition?

The Sept 27 launch has been scrubbed due to Tropical Storm Ian and the next date is TBA. Stay tuned folks for the launch of this new chapter of human exploration of the Solar System! 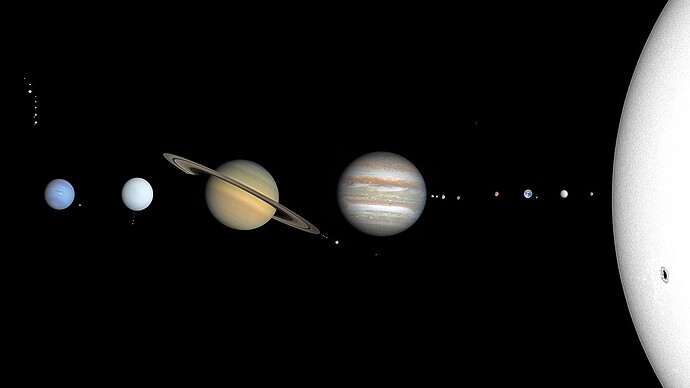 Mr Rodney. One of my favourite teachers

I enjoyed this read on gravity & the universe. Not the lightest read, but to get a better understanding. (I love his shadow in this picture). 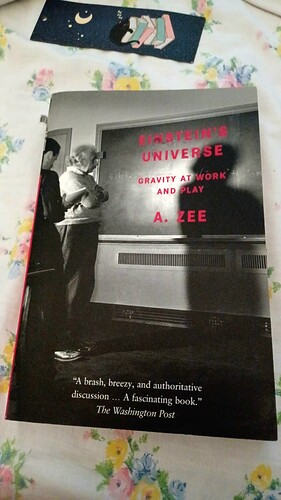 I hope you feel better ⚘️

Yes, Armageddon (top of that list) is famously inaccurate as a story of what actually happens (or could happen) on a trip to outer space, buuuuut…

The problem of how to handle an incoming asteroid is one that is being studied. Introducing the DART mission, which is on track to collide with a small asteroid soon - in just under 1.5 hours, to be precise - to see what impact (

) it will have on the rock’s trajectory (to assess whether a similar strategy could be used, hypothetically, to divert a small asteroid on course for Earth). 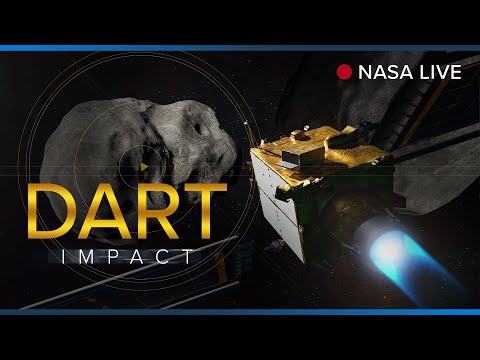 We’ve been discussing this today, over $300million test… its only the size of a vending machine! 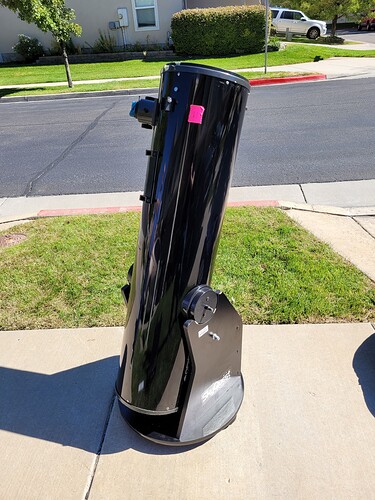 Borrowed this telescope recently but haven’t had a chance to try it out. Tonight Juipiter will be at his brightest all year, so out it will come.

@mx_elle that looks like an interesting read, thank you for the recommendation and for the well wishes. Its a slow mend, but I’m getting there

@Matt thank you for your thoughtful reply. I will come back to it when I’m able to sit at my desk and spend some time on it. This is about as long as it gets via a cellphone for me. 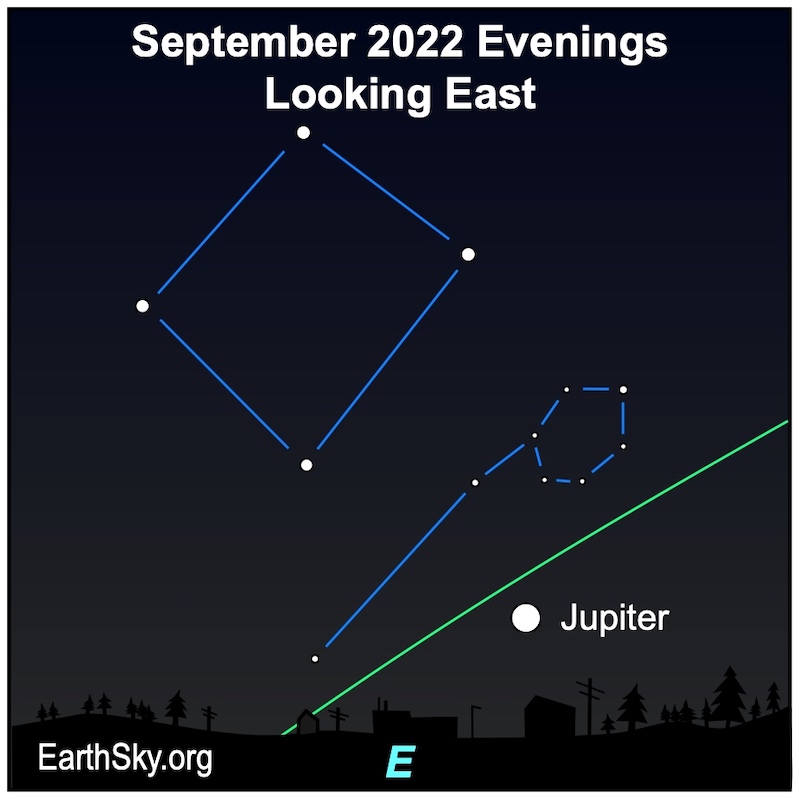 I am wrapped in ice more than 15 km thick and, under that frozen surface, I almost certainly have a vast ocean of water, at least five times deeper than the deepest point of our ocean on Earth.

She just had closeups done a couple days ago:

Observations from the spacecraft’s pass of the moon provided the first close-up in over two decades of this ocean world, resulting in remarkable imagery and unique science.

And she’ll be visited soon by another probe - the Europa Clipper - headed there specifically to investigate the subsurface ocean: Amazingly, this moon, no bigger than Earth’s moon, may have twice as much water as we have here on Earth!

Learn more about this icy moon of Jupiter!

I love everything Space since being a child.

Me too! Welcome to the club.

Personally I am a huge Star Trek fan too; love the series, and the movies; I’ve loved it since I was a kid. Love Star Wars too, for that epic good-vs-evil fight

I have followed all the Mars rovers with rapt interest. It is so fascinating what they discover